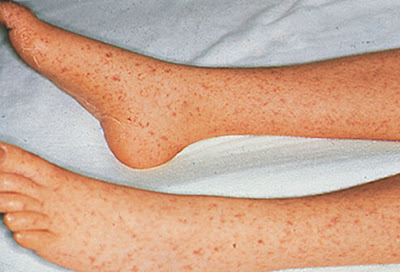 Rocky Mountain Spotted Fever, abbreviate in medical references as RMSF, is the infection which is spread by the bite of any hard body, infected, Ixodes or 3-host tick. The adult ticks are eight-legged ones which are closely related to the common spiders, chiggers, and mites. These ticks hatch from eggs which are already infected with bacteria caused by RMSF.

So the newly hatched ticks can directly transmit it to the blood of the host in just 3 hours. In case of other diseases like Lyme disease, it requires the attachment to be for a minimum of 36 hours. RMSF can be transmitted by the ticks at all life-stages, but Lyme disease can only be transmitted at the nymph form of deer tick as this can only get attached being unnoticed for the needed time period to transmit the disease.

RMSF is a highly infectious disease that is caused by bacterium Rickettsia rickettsii (R rickettsii), which is generally associated with ixodid ticks. RMSF also has a case-based fatality rate, which may go as high as 30% in some patients if left untreated.

RMSF was a condition which had been intensively diagnosed throughout the USA and it is also found to be common in Southeast part of America than at the Rocky Mountains. This disease was first recognized in the Rocky Mountain States, and that is how it got the name. It has since been reported throughout the United States and also in Mexico, Central America, Canada, and South America etc.

Symptoms of Rocky Mountain Spotted Fever usually include a sudden rise in temperature to above 103 degree Fahrenheit or more, rash, and headache etc. There can also be rashes in it early stages. If left untreated, RMSF may also result in riskier symptoms including;

However, majority of the RMSF infected patients may not report any typical RMSF type of fever, rash, or any noticeable tick bite at their first visit to the clinic. The rash also appears many days after the onset of initial symptoms like and can slowly turn to be petechial. No history reported of any known tick bite is so common. Slowly there can be symptoms of mild headache, low fever, joint aches, body aches, fatigue, sweats, and loss of appetite

Diagnosis of RMSF is usually done by blood testing for IgM protein, which is basically produced by the immune system in order to fight infection. ELISA test is also commonly used to identify this immune disorder. In infected people, platelet count and white cells are found to be very low.

RMSF is commonly treated with the drug named doxycycline. This is found to be quite effective, but may have some side effects also like sun-sensitivity, nausea, headache, and gastric upset etc. This drug is also not recommended for children of age less than 8 unless the condition is life threatening.

Those who are getting diagnosed early with this disease condition and get treated appropriately are found to make complete recovery in just 10 days itself. Proper diagnosis and adequate antimicrobial therapy is essential in patients affected with RMSF in order to prevent further complications or death.

How To Collect Evidence For An Auto Accident Case